For those unaware, Windows 10 Pro for Workstations is a high-end edition of Windows 10 Pro which comes with support for server grade PC hardware and has been designed to meet critical and compute intensive workloads. 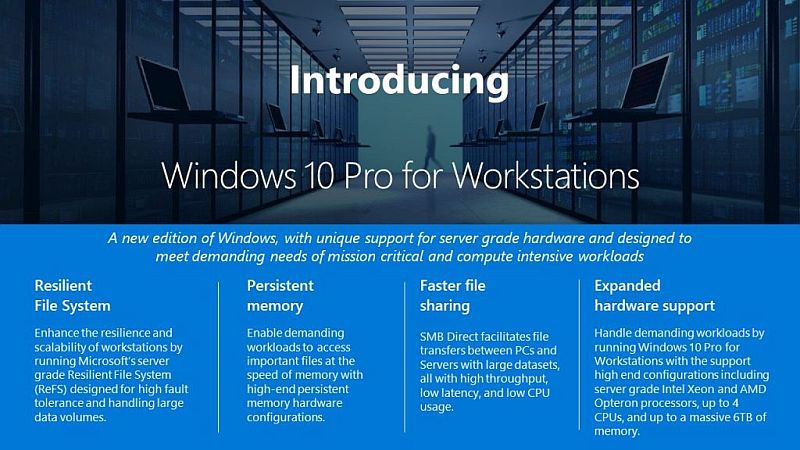 Microsoft says that Windows 10 Pro for Workstations has been optimised to increase performance and reliability with features like ReFS (Resilient File System) which provides cloud-grade resiliency for data on fault-tolerant storage spaces and manages very large volumes with ease, and faster file sharing with a feature called SMB Direct which supports the use of network adapters that have Remote Direct Memory Access (RDMA) capability. It also promises persistent memory that provides the most demanding apps and data with the performance they require with non-volatile memory modules (NVDIMM-N) hardware. This ensures read and write of files with the “fastest speed possible, the speed of the computer’s main memory,” claims Microsoft.

“Users will now be able to run Windows 10 Pro for Workstations on devices with high performance configurations including server grade Intel Xeon or AMD Opteron processors, with up to 4 CPUs (which is today limited to 2 CPUs) and add massive memory up to 6TB (today limited to 2TB),” Microsoft’s Klaus Diaconu, Partner Group Program Manager, Windows and Devices Group wrote in an announcement blog post.