Amazon’s $13.7 billion purchase of Whole Foods Marketwill be finalised Monday, and shoppers will see an immediate markdown in prices on a number of items, including salmon, avocados, baby kale and almond butter, as the tech giant looks to shake up the grocery business.

Amazon and Whole Foods announced the news on Thursday.

“The two companies will together pursue the vision of making Whole Foods Market’s high-quality, natural and organic food affordable for everyone,” they said in a joint statement. “Whole Foods Market will offer lower prices starting Monday on a selection of best-selling grocery staples across its stores, with more to come.”

Amazon said it will continue to lower prices at Whole Food stores and will eventually offer special discounts and in-store benefits to Amazon Prime members. (Jeff Bezos, the founder and chief executive of Amazon, owns The Washington Post.)

Other foods that will be cheaper beginning next week: Bananas, eggs, ground beef, rotisserie chicken, butter and apples.

“Everybody should be able to eat Whole Foods Market quality – we will lower prices without compromising Whole Foods Market’s long-held commitment to the highest standards,” Jeff Wilke, chief executive of Amazon Worldwide Consumer, said in a statement. “There is significant work and opportunity ahead, and we’re thrilled to get started.”

Analysts said the slashing of prices was an obvious move. Whole Foods – nicknamed “whole paycheck” in some circles – has long struggled to shed its reputation as a pricey alternative to other supermarket chains. The company’s prices are about 15 percent higher than at the average grocery store, according to Morgan Stanley.

“Amazon is playing to its strengths here, said Michelle Grant, head of retailing at Euromonitor International, a London-based market research firm. “Obviously the low-cost approach is in Amazon’s DNA, and it’s something Whole Foods has been struggling with for a quite some time.”

For Seattle-based Amazon, the addition of Whole Foods means laying claim to more than 460 physical locations and an inroad into the competitive $600 billion grocery industry. The company will add Whole Foods’ private label products – including 365 Everyday Value, Whole Paws and Whole Catch – to Amazon.com, AmazonFresh and Prime Pantry. Some Whole Foods stores also will begin adding Amazon Lockers, where customers can pick up online orders or drop off returns.

“Grocery has always been the achilles heel for Amazon,” Grant said. “Amazon’s competitive advantage is its speed – and that’s what it’s bringing here, with quick turnaround and quick changes.”

Amazon announced plans to buy Whole Foods in June. The deal received regulatory approval from the Federal Trade Commission – as well as a green light from Whole Foods shareholders – on Wednesday.

“Change is coming much faster than anyone imagined,” Neil Saunders, managing director of GlobalData Retail, said in an email. “Amazon is wasting no time in making the most of its newest division.”

And, he added, there is already significant overlap between the customers of the two companies. More than 70 percent of Whole Foods’ main customers are members of Amazon Prime. The loyalty program, which has an annual fee of $99, offers a number of perks, including free two-day shipping, video streaming and discounts on recurring purchases of household goods and diapers. 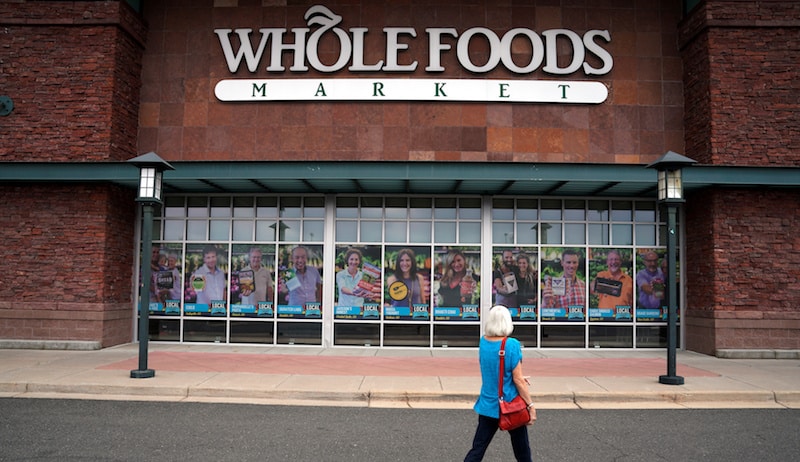 News of the impending deal has rattled the grocery industry, which is already struggling to keep up with growing competition. Although Whole Foods remains a niche chain – Walmart and Sam’s Club, by comparison, have 10 times as many stores- analysts say an Amazon-backed grocer could have broad implications on pricing and profits.

“Rivals should be under no illusion that they are now dealing with a competitor that is not afraid to damage profits and margins if it creates long-term gains,” Saunders said. “This will only add further pressure to already crimped margins in the sector.”

On Thursday, stock prices of rival grocers took a hit on the promise of lower-priced goods at Whole Foods. Shares of Kroger, which was rumored late last year to be considering its own takeover of Whole Foods, fell more than 8 percent. SuperValu, with a network of 2,000 stores across the country, was down more than 6 percent, while Costco dipped about 5 percent. (Shares of Whole Foods, meanwhile, rose about 1 percent.)